So I’ve been quiet for a little while just getting on with life and after a week to ourselves thought it’d be a great time to do an update.

It’s not gone without stresses and strains. If you spoke to me the week before we were due to leave, I wasn’t going. Mike had been unwell and on antibiotics the two weeks before we were due to fly and we were convinced we weren’t going and would have to cancel. The Friday before we were due to go we had the all clear and we went into sorting mode. Everything washed, ironed and packed in two days. Sorted parking the morning before we went, uncancelled the cancelled dog walker and house sitter. 5am came and off we went!

Car packed up and to the airport, slight delay on the flight but this fine as it meant more mooching time in the airport.

So the thing about pws (and all the wonderful additional complications that come along with it) that we have found is that it likes to show up unannounced. And it doesn’t creep up and tap you on the shoulder, it throws a bag over your head and drags you off to a dark room. We’d found our gate number and got to the gate, waiting for them to start calling our seat rows. Changed Oliver’s nappy and then Mike nipped off to the loo. Check my phone ready to tell people we were going to board and look over at Oliver

He’s having a fit.

Over the past few months we’ve started having testing for epilepsy. He’s having two different kinds of fits. One is your typical convulsion style and the other more of a drop attack.

The thing with pws that we struggle with is poor temperature regulation. He gets hot very fast and cold very fast. He also doesn’t show us when he’s sick very well. He is snotty very quickly and that’s normally a sign but this time absolutely nothing at all hinted at him being ill. Febrile convulsions are common in children and are caused by a sudden change in temperature. Our current complication is that his temperature isn’t changing so this is why they’re leaning towards epilepsy rather than it being febrile convulsions

He was full blown seizing and I’ve had to drag him out of the buggy and get him onto the floor. Luckily the gentleman sat opposite could see what was going on and asked to get my husband (then was not the time to correct him about my martial status ) so I said ‘please, he’s called Mike’ He came out and Oliver had managed to come back round but was dazed and wanted to sleep. Mike went off to speak to the staff and then next thing a paramedics is with us and Olivers coming round and getting ready to do his flirting routine. We were then shot over to Whythenshaw hospital in an ambulance to get checked over…on the way another one happened. No temps, nothing obvious wrong. At the hospital did bloods and monitored him and couldn’t find anything wrong. Oliver was in full on flirt mode so we figured he must be ok and tried to get to turkey again.

After trying to sort over the phone it felt like we were getting no where so we went back to Manchester airport and started all over again.

Made it onto the plane and yes we’re ready for take off.

Cabin crew get ready for take off

Yes that’s that right he went off again, slept for for an hour, all as we were going up into the air. Spoke to the stewardess and explained the situation. Then two hours later…another one.

Land and get our visa and through to pick our baggage up and he has another.

Two more in the hotel in the morning.

At this point mike and I had absolutely no idea what to think. What do we do. Do we go home. I speak to mum and she sends me money to arrange flights. We go to find a doctor to get him to checked him over and it turns out he has tonsillitis. (Still unsure why Whythnshawe hospital hadn’t picked this up) so were given a prescription for antibiotics, paracetamol and ibruprofen and sent on our way. We spent the rest of Tuesday on egg shells and he had another fit that afternoon. This fit happened after this photo was taken. He’d spent time in the pool and having fun

I imagine you’re probably wondering why we went ahead and got on the plane. At one point I was as well but I can hand on heart say if I had thought the additional fits would have happened I would never ever have even considered rebooking flights and heading over. Work colleagues will tell you that in my head I wasn’t going away so wouldn’t have been bothered if we didn’t go

I’m writing this post on Thursday after starting out holiday journey Monday morning. We’re now 48 hours fit free. We are however around 8 ice creams down, we’ve probably dried a cow the amount of yoghurt and milk we’ve got through.

To the pws families who are probably horrified that he’s surviving on that, not that I have to defend our choices, but we’re on a holiday. He never has it at home and if you’ve ever had tonsillitis it is the most horrendous illness. All I’d want to eat is icecream (after having tonsillitis enough times to have my tonsils out I can vouch for doing this) and finally some food is better than no food, especially on 30 degrees plus heat.

Tonight our aim is to get to the kids mini disco. Which I’m probably more excited for as I LOVE the mini disco and I can bet Oliver will love it.

All in all…I’d do another all inclusive while we’re still in this stage. While he’s not food seeking and we aren’t having any of those issues (we’re still on high energy milk because we can’t get him to put weight on) for you newly diagnosed parents, don’t write anything off. I thought I’d have to stop the ‘normal’ world and go to another planet.

I’ll finish the post up with photos of a very memorable first family holiday. 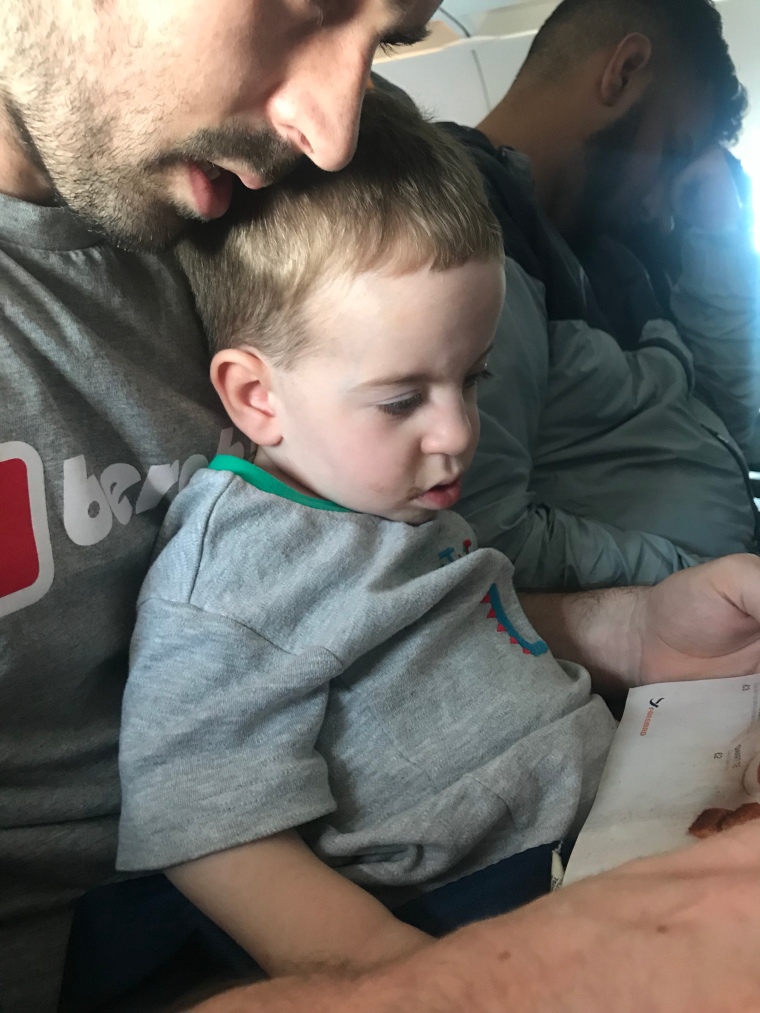 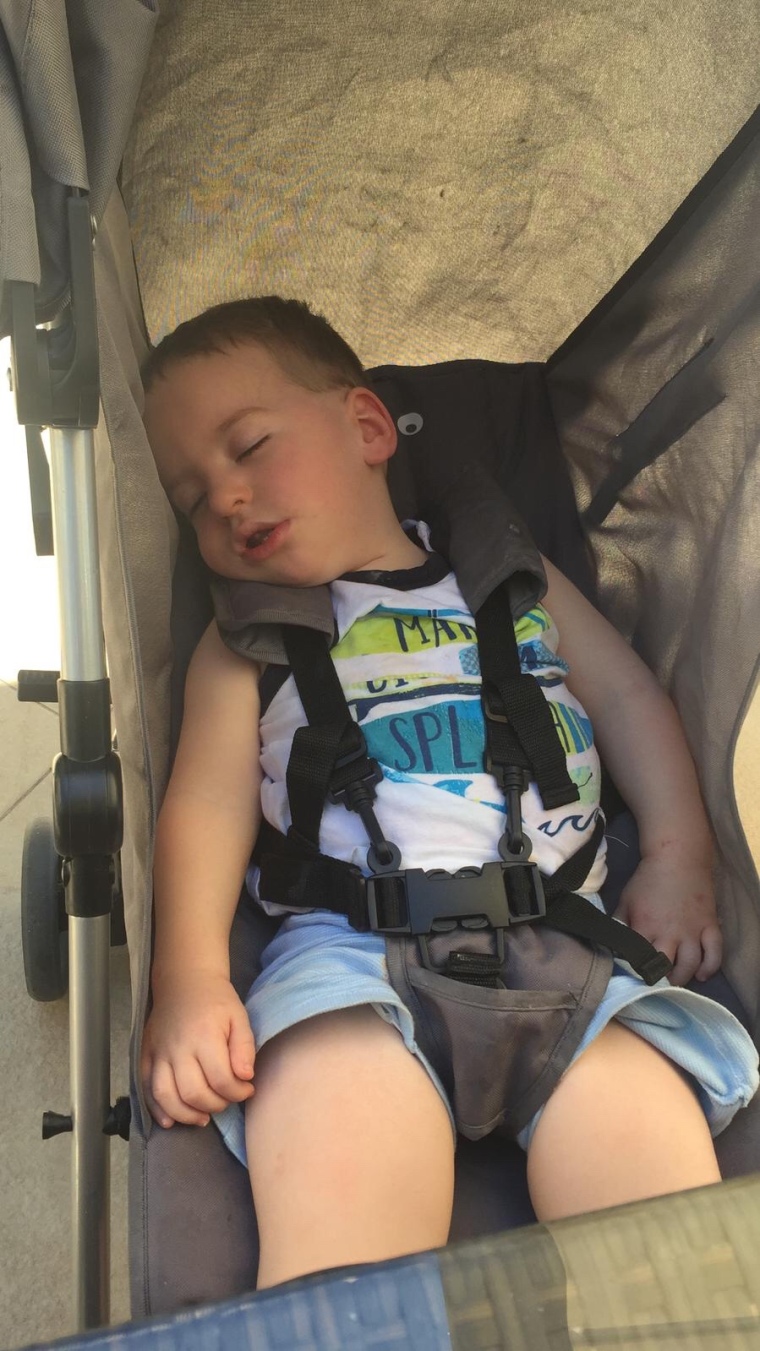 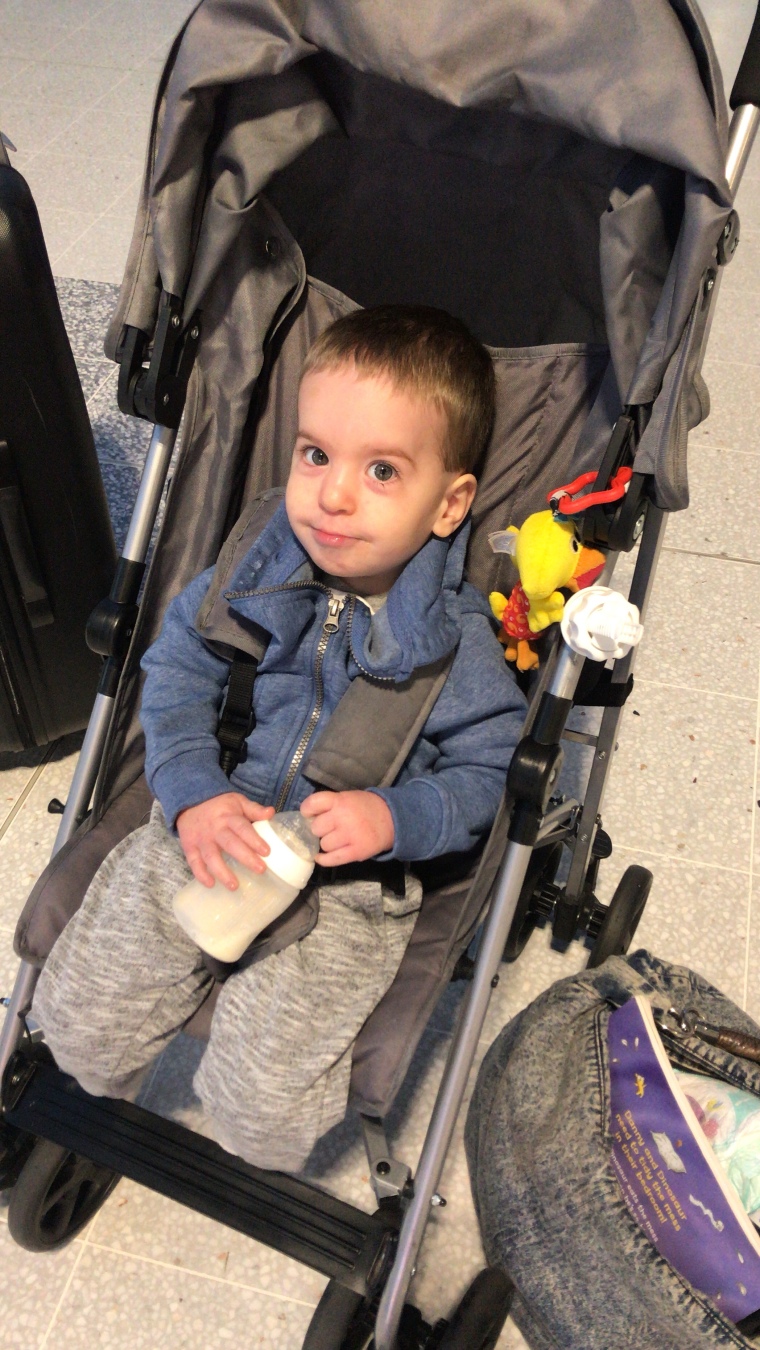 One thought on “Our first family holiday”

There were 6 in the bed and mum said...everyone get out I'm falling onto the floor 😑 I can't wait for the blinds to be fitted in our bedroom so we get off this mattress on the floor in the back room
Valentines day... A day to share photos that you like of you and your special one. My special one likes to dance holding my bum
All stickied up ready for his sleep study!
2019, my favourite year yet. Its been full of appointments, stress and worry. There's been ups and downs but I think the photos show why despite that it's been great. Getting married, spaghetti snot, looks of love, family time, rekindling friendships and alcohol filled walks, days and nights
31 today but I'm not too old for a caterpillar cake... I've got the bum which looks like another emoji 🐛💩
2017, 2018 and 2019. Make him stop growing 😭😭😭😭